SOME WHERE IN HERE… New Papers

Responsible for the illustration, photography and text for New_Papers, a themed collective free publication on illustrations and photography. In its third issue, the selected theme was the idea of the time machine. The illustration created aims to be a remembrance of Vertigo, the film by Alfred Hitchcock. The caption under the image retells MD project history in a very personal way. 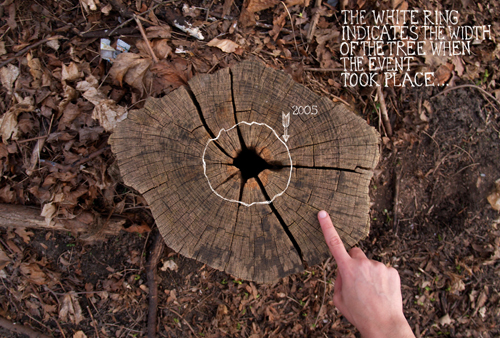 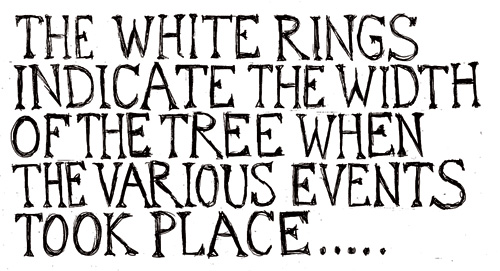 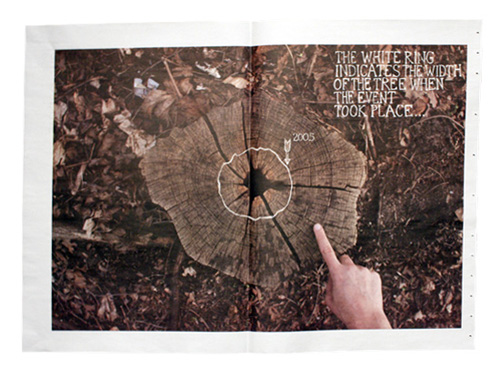 It was 2005 when I embarked on Machines Désirantes’ project, an initiative that seems hard to define and can only be described as a concept in which elasticity, ambiguity, inaccuracy and imperfection have always been present.

My main purpose was to provide a platform for dissemination that could serve as the starting point for other multidisciplinary projects and would be flexible when needed… Five years after, looking back to the remaining tree trunk, crossed-sectioned after the experience, I can see its delicate and irregular concentric rings spreading out in the form of abnormal waves; Machines Désirantes has turned out not to be a particular designer or studio, neither an art director nor a curator, neither a promoter nor a mobile club, neither an individual nor a group. Neither the one nor the other, but all at the same time. It is like a creative cell that promotes cross-sectoral practices in design, as we consider this discipline as the ideal form of expression in which content and style go hand in hand.

At times deliberately and at times unconsciously, I have always avoided any kind of specialization, being aware of the problems that this choice might entails. I don’t relinquish the thrilling of new challenges, partly due to my collaboration with open and approachable teams. As Milton Glaser said, “I only work with friends or people who might end up becoming friends”. This could explain when “I” becomes “we”: we communicate, promote and design events in a constellation of allied machines that makes the mixing of art direction, graphic design, and static and moving images easier to crystallize. This work originates from our passions: music, visual arts, cinema, entertainment…A constructed reality that is immortalized with humble strokes that represent our ideas of time, memory, duty and life.